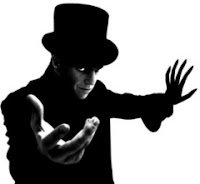 There’s something of the shark about Robertson’s wide-eyed smile, and his manic intensity wouldn’t go astray in a Tim Burton film. His best routines are mostly autobiographical in nature, though he cheerfully admits to treating the facts “like George Lucas treats his films,” so that it’s never clear where truth ends and fiction begins in his tales of bondage, self-harm, and theatre in education.

His material – whether he’s dissecting modern drama or advocating the murder of The Sound of Music’s Maria Von Trapp – is edgy, intelligent, and smoothly delivered, though the appearance of a ukulele feels like a hangover from an earlier show, and a late moment of sentiment is a touch too contrived.

This review originally appeared in The Age on Wed 11th April 2012.

Posted by richardwatts at 8:31 am